Comfortable in my "Artist" Skin.

As I continue to age, I can honestly say that I am happy where I am in my life, and especially in my career!  This past year has been one of questioning and discovering.  A year of finding out who I am as an artist, and why I paint what I paint.

I have wanted to be an artist since I was probably 5, and do remember drawing, (mostly coloring) and making art whenever I could.  I can see now that the encouragement by my parents, made me believe that I would be anything I wanted to be.  I started painting as a young mother, at age 21, and just never stopped.  I started in watercolor, painting still life, and became quite proficient at it!  I started painting flowers....

I won awards in the state fair in WY, and then when I moved to CA, some 8 years later, I got gallery representation in Napa, at the first gallery I trudged my paintings into; Jessel Gallery.  I had no idea how "lucky" that was.  I also got into a gallery in San Francisco, but was so disappointed when I saw my work was not hung, I pulled it out.....I had no idea......

I continued painting "traditional" still life with Chintz backgrounds, and then tapestry.  It was quite a bit of work, painting tapestry, but they all sold.....funny thing I got tired of them, and started painting something else......black and white stripes!

These black and white striped paintings received a lot of attention.  They were featured in American Artist magazine, Southwest Art, and even made the cover of the Artist's Magazine in 1994. 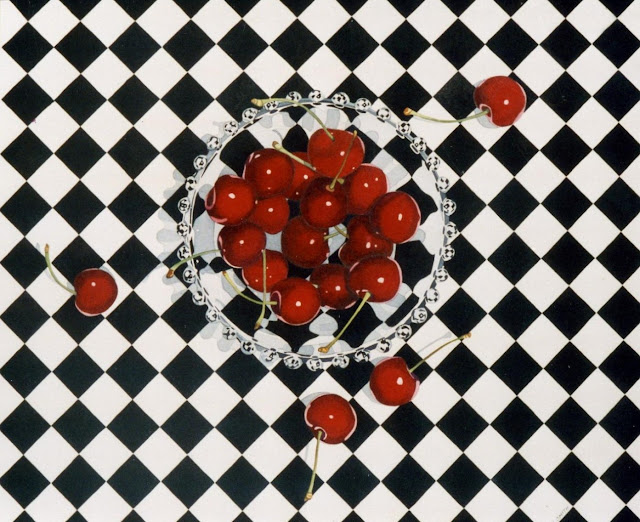 I was always amazed by the reflection and refraction on silver and glass!!

After I moved to Albuquerque, NM, I decided that if I wanted to play in the "big leagues" I should probably try painting in oil.  After all, I believed if I could paint in wc, I could paint in oil.  It took a little practice, but I loved it!!  And I could paint BIG!  I started with still life....keeping towards the more contemporary.

Oh, and I also painted a few flowers in oil.


As my work evolved, I started to paint the figure.  I started painting my daughter; Leah.


I painted 11 of these paintings, each measuring 9" x 12".   When Martin Muller, owner of Modernism
Gallery, in San Francisco came to my home for a studio visit, these were the paintings that struck his eye, and got me representation in his very well know and well established gallery.


I did still paint the occasional child.

After that, and under Martin's artistic eye, he mentored me, and began to lead me into my current focus, which is painting nudes.

My figurative paintings started off with a more traditional feel, and Martin loved the thought of a woman reading a book, so I went with it!  Martin was a tough task master, but taught me so much!
Martin could spot a misdrawn thumb, or a misshaped buttocks, and we had many conversations about my paintings, and what was right and not right about them, the timing of my first one woman show, and the art world in general..   He was always right on his critiques!

We also learned about the art world, as my husband and I were lucky to be included in many of the fabulous after opening dinner parties that Martin hosted, and we felt we were truly in another world.....far from our WY roots.

As I continued to paint the figure, it also began to take a contemporary arc!  I was painting plain backgrounds when Martin suggested I try a painting in the background......but whose painting????  Then, at the same time we both said: "Georgia O'Keeffe"!!!  How perfect!  I live in NM, and Georgia's paintings were beautiful and sensual....done and done!

I have always wanted to have a message in my work, and I felt that I was lacking in this department.  At one of my artist friend's suggestions, when complaining that my paintings didn't have the depth that his had, he said that if I looked deep enough I would find a meaning, or theme running throughout my work

Thus I began my quest to discover why I paint what I paint. While most of my current work certainly uses tongue in cheek humor, I am able to make a comment on society, and our great American culture using my models, props, backgrounds, and titles, and I have begun to realize that my work actually speaks volumes!

Even as I look back on the still life, at first I was just painting what I thought was beautiful, in an interesting composition, but then I started to add cards and dice, always making sure the numbers were "lucky"!

In my career, I have always chosen to not use my gender to promote my work, or to determine what I paint.  Of course being female, in and of itself helps dictate what I paint, by my experiences as a woman, but  I refuse to use it as a chip on my shoulder as an excuse to why my work would possibly not stand up in creativity and execution as any man's work.  Even as a young artist, I always knew that if the work was good enough it would be accepted in galleries and by the critics.


After painting many Georgia O'Keeffe backgrounds, I moved on to Pop Art!  I especially love Wayne Thiebaud's work of cakes, pies, and deserts, and being as I lived in the Bay Area for awhile, as does Wayne, and was represented by a San Francisco Gallery, I felt it was a perfect fit! Every iconic art background I paint is my homage to that artist.  It is such a thrill to paint in another artist's style, while trying to keep the spirit true to the artist.

Meanwhile, I split from Modernism, even though it was a very difficult decision, and moved to Scott Richards Contemporary Art, also in San Francisco.  Scott also mentors me, and helps nurture my artistic spirit, which is an important connection between artist and dealer.  Scott encourages me to paint what I need to paint!  Artists are not always easy to deal with.....lol

Now I am finding that the American culture is shifting again, as it always does!
Do I have a voice with my paintings?  Yes, I do!


In conclusion; this is the longest blog post I have ever written, (90 photos) but I hope maybe someone will read it, or at least look at the pictures.....lol  I have painted 642 paintings since 1983, and will continue to paint what I feel is beautiful and important!  As my gallery, Scott Richards Contemporary Art says:  "With tongue in cheek humor, Smith manages to honor her Pop predecessors while maintaining an unmistakable sense of irony."

In the end, I believe it is up to the viewer to bring their own meaning to art.  The art is not just about the artist, it is about the viewer, and how he perceives the art.  I read an interview the other day by Mike Cockrill, and I think he nailed it!  He said:  "What makes an artist is the relationship their work has with the viewer.  Culture decides what art is going to look like at any particular moment.  Culture completes the transaction between maker and beholder."

So culture indeed makes art relevant or not.......and culture will also determine whether it will be validated or not.  Seems only the future will tell, but I feel I am painting the uniquely American culture that I grew up with in the 60's and 70's.  Especially with the Pop Art backgrounds from the same time period.  My son, who is also an artist, said; "Your paintings invoke a style.....an accurate assessment of an era...."  I hope that is true.

I don't always paint to that "theme", or "brand", but I have realized I do have a "style", that I can't seem to escape......I would say the key to the meanings of my current paintings begins with the eyes.  Look into the eyes of my models, and I hope you will find something that resonates with you........