If you have been reading my blog posts you know I have been working on a large (72" x 30") painting for the past several months.  I have been hesitant to post work in progress since it is a commission, and I didn't want to spoil the "big reveal". 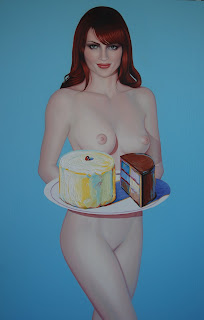 Having said that I think I am ready to post the painting!  The whole process, from beginning to end has been pretty much a joy!  My client is the one who came up with the idea for the painting, and it was just such an incredible idea, that I was glad we could bring it to reality. 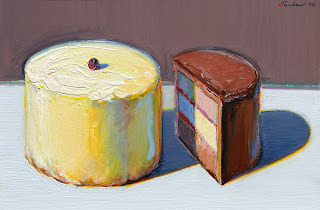 My client is an avid art collector, and has recently ventured into Pop and Modern art.  He is lucky enough to own a Wayne Thiebaud painting; "One and 1/2 Cakes".  After seeing my paintings that include a Wayne Thiebaud reproduction behind my nudes, he visited my gallery in San Francisco; Modernism, and purchased my painting "Cakes".

I asked him if I could see a photo of his Wayne Thiebaud, and he emailed it to me, along with the suggestion that perhaps I could paint a nude holding a tray with cakes on it, welcoming people who enter his San Francisco apartment, where his painting "One and 1/2 Cakes" is hung.  I said I thought that sounded great, and called my model, baked 2 3-layer cakes to replicate the painting's cakes, and had a photo shoot as a "jumping off" point  Since the real cakes were kind of a mess, (lol) my client suggested maybe I try painting the cakes to look like his painting.

That is what I did, and I am amazed at how it turned out, and without too much trouble....I can say now.  Because the painting is taller than I am, I had to stand on boxes and a board to paint the head, and it was difficult to get a sense of the whole painting when I was painting the lower legs, but other than that, it went rather smoothly.

In the end, I decided to keep the painting in a kind of "pinup" style, keeping the figure light, and I think it really works.  Photographing the painting has proven problematic, in that the head (hair) is photographing dark, and I haven't quite figured out how to shoot it perfectly yet. So now I have to let the painting dry, varnish it, come up with a title, and ship it to San Francisco!

Great painting and concept. You did a great job with the frosting and all!

Thanks Alvin! Did you see my painting "Frosting"? Even more cakes and frosting!